Belmont Police arrested four Cambridge residents yesterday for trespassing in the 15-acre floodplain forest “Silver Maple Forest,”a section of Belmont bordering Cambridge and Arlington, where a decades-long battle for conservation hangs by a thread. A press release issued by the Friends of Alewife Reservation reported that

The arrests were peaceful and without incident.  Dana Demetrio, University of Vermont student, Sylvia Gilman, Illustrator with Peace Action; Ben Beckwith software repair and musician; and Paula Sharaga, children’s librarian, were agreeably escorted by police out of the forest into paddy wagons after refusing to leave when asked to do so. They say permits are still pending or  “up in the air” in Belmont and it is nonsensical to clear-cut before building permits are approved and municipal matters settled in both Cambridge and Belmont.

One protester referred to the removal of the trees as a”crime against nature.” Madeline Sis, a Lesley University student who was arrested at a similar protest on Tuesday, said “Each tree falling is like a human dying because people will pay dearly as more flooding happens.” Ellen Mass, director of the Friends of Alewife Reservation (FAR), has been involved in legal cases against developer O’Neill Properties regarding the environmental impact of the development. Mass and others have asserted that the development, on which 300 residential units will be built,  will be in violation of FEMA floodplain designations, including numerous municipal/state guidelines, Mass, in the FAR press release, stated

“A French coastal town is even preparing to send their Mayor and administration to prison for allowing permits on a floodplain which ended in 29 deaths with surges from storm Xynthia,”

FAR is a member of the Silver Maple Forest Alliance, which plans another rally Monday, October 20th at 7:00 a.m. at the forest site on Acorn Park Drive. 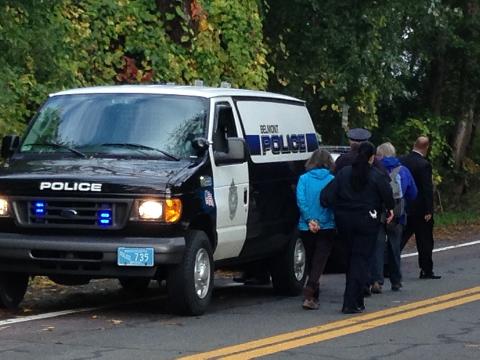 FAR also reported in the press release that on Monday, October 20th, the Cambridge City Council will hear a policy order requesting that no Cambridge property be used for the “development designs” or “square footage replication area,” As the developer’s design plans for the site extend across the Belmont border into Cambridge, this measure has the potential to halt the clearcutting. In addition, a temporary injunction has been filed in Woburn District Court to stop the tree felling without known results.